Posted on October 6, 2017 by Itinerary Planner 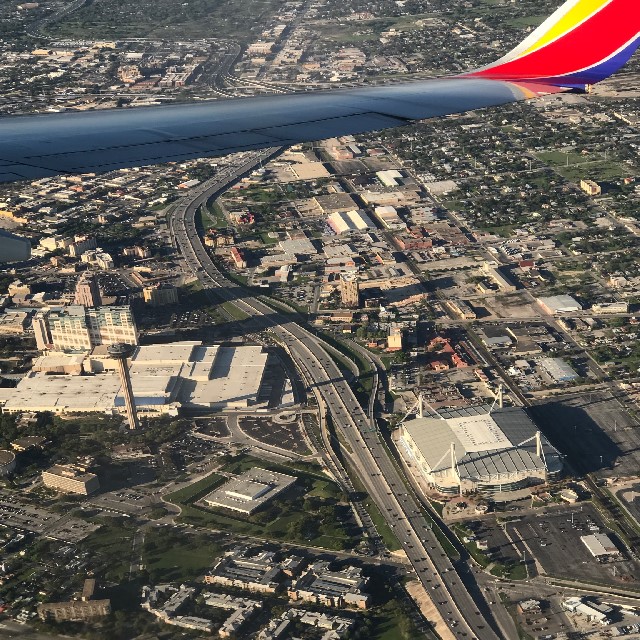 Cabin stewards Anthony, Clarence and Frank took away the blues everyone may have been feeling that evening.

It had been raining all day.  The weather was showing some solidarity with my mood.  I had flown from San Antonio to connect in Houston bound for New York.  I was leaving family members behind and heading Northeast, not knowing when I would see my loved ones again.  I was sad.

Due to a boarding  irregularity (the lights along the jet bridge not working) we were delayed with the hope that the matter would be resolved quickly.  With an hour to spare, I wandered aimlessly into the nearby shops browsing the shelves and began to wonder what would make people pay high prices for tchotchkes.  That is another blog posting for another time.

While waiting to board, airport personnel found a viable solution to the unexpected anomaly.  We were switched from gate 33 to gate 32.  In no time the boarding process began, everyone was seated and ready for take off.

Then the show began.

Our all male cast (stewards) made everyone on board forget about the delay.  They managed to deliver their safety monologue, a serious message, in a humorous way.  I believe they used their class act and humor to charm their captive audience.  It worked.  From the chatter and occasional laugh I could tell  there was a sense of ease the entire trip.

We were told that steward Frank was in training and that he was on the job just a mere four days.  If that was really true, he had found his calling.  His jokes caused outburst of laughter and many times received an applause (we were certainly off, off, way off Broadway).  Frank and his cohorts served the passengers with such flair that we forgot we were flying at an altitude of more than 35000ft.  I don’t recall experiencing any turbulence on that flight as I did on the earlier flight from San Antonio to Houston, but maybe I was to busy laughing that I may have missed it.

Even though we arrived at our destination one hour later than scheduled, no one was rushing to get off the aircraft.  People were still chatting with their neighbors and helping others with their bags from the overhead bins.  This particular Southwest flight crew deserve special mention and a huge thanks for making the journey a memorable and lighthearted experience.  Obviously they love what they do and that evening they took flight attending to another level.  Thank you guys.